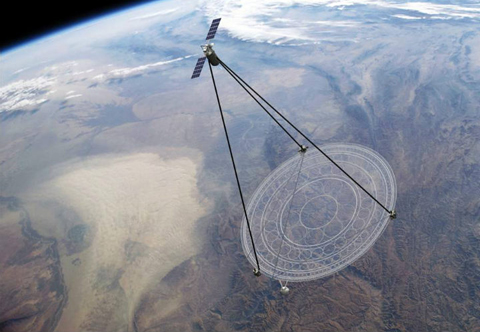 MOIRE would be a geosynchronous orbital system that uses a huge but lightweight membrane optic. A 20-meter-wide membrane “eye” would be etched with a diffractive pattern, according to DARPA, which would focus light on a sensor. Reportedly it will cost $500 million USD for each space-based telescope, and it would be able to image an area greater than 100 x 100 km with a video update rate of at least one frame a second.

DARPA says the program aims to demonstrate the ability to manufacture large membranes and large structures to hold the optics flat, and also demonstrate the secondary optical elements needed to turn a diffraction-based optic into a wide bandwidth imaging device.

The MOIRE program began in March 2010 is now in the first phase of development, where DARPA is testing the concept’s viability. Phase 2 would entail system design, with Ball Aerospace doing the design and building to test a 16-foot (5 m) telescope, and an option for a Phase 3 which would include a demonstration of the system, launching a 32-foot (10 m) telescope for flight tests in orbit.

The 20 meter (66 ft) design is quite a bit larger than NASA’s next-generation James Webb Space Telescope that has an aperture of 21 feet (6.5 m).

Public Intelligence reports that such a telescope should be able to spot missile launcher vehicles moving at speeds of up to 60 mph on the ground, according to a DARPA contract. That would also require the image resolution to see objects less than 10 feet (3 m) long within a single image pixel.