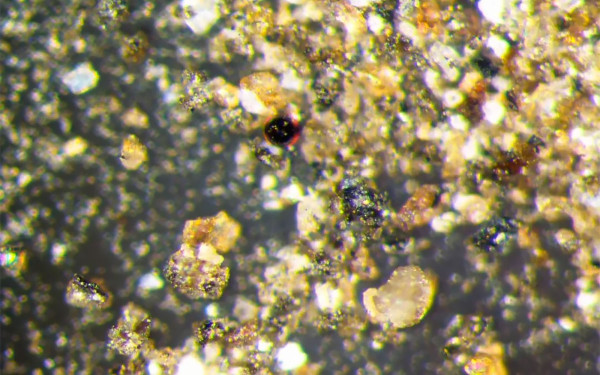 A new mineral has been found on the moon. Experts called it the "Chang'e Stone"

Chinese scientists have discovered a new, previously unknown mineral on the moon. It was named "Chang'e Stone", consonant with the name of the Chang'e-5 spacecraft, which delivered samples of lunar soil to Earth. This was reported by the Chinese National Space Agency and the Atomic Energy Administration of China (CAEA). The agency also showed photos of the new mineral and noted that it was the first time China had made such a find in the history of its space expeditions.

Geologists have isolated a single crystal particle about 10 microns in size from 140 thousand particles of a sample of lunar soil. Then it was possible to decipher its crystal structure and confirm that the stone found on the Earth's satellite is a new mineral. The discovery has already been confirmed by the International Mineralogical Society (IMA), as stated by the National Space Administration of China.

"Chang 'e Stone" was classified as a phosphate mineral, its particle looks like a tiny columnar crystal.

1,731 g of lunar soil samples were delivered to Earth by the capsule of the Chang'e-5 spacecraft in December 2020. The launch of the spacecraft to the Moon using a launch vehicle took place from the Wenchang Cosmodrome on Hainan Island a month earlier, in November 2020. The Chang'e-5 probe separated from the rocket after about 40 minutes and landed on the surface of the Earth's satellite a week later.

After the samples were delivered to Earth, scientists conducted numerous studies and announced a new mineral on the eve of the Mid—Autumn holiday - a traditional Chinese holiday also associated with the Moon. It is celebrated on the full moon of the 15th day of the eighth lunar month of the Chinese calendar. This year the holiday falls on September 10.