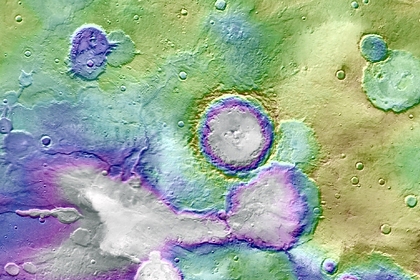 Traces of more than 200 catastrophic floods have been found on the surface of Mars, which occurred in the distant past as a result of breakthroughs of crater walls. Many of them lasted more than a week. The results of the study were published by the scientific journal Nature.

Scientists have little doubt that rivers, lakes and entire oceans existed on the surface of Mars in ancient times. Recently, researchers found out that the most powerful hydrological cataclysms periodically occurred on Mars, in which huge volumes of water were involved – giant tsunamis, whose traces have been preserved on the shores of ancient dried-up reservoirs of the Red Planet.

In a new study, astronomers led by Caleb Fossett from NASA's Marshall Space Flight Center found that such cataclysms played a crucial role in shaping the appearance of many mountainous regions of Mars.

During the work, scientists analyzed three-dimensional images of the planet's surface, which were taken by Mars Global Surveyor and other NASA spacecraft. Planetary scientists were interested in how often the Martian lakes overflowed with water and what happened next. In particular, as a result, new rivers could arise or flooding could occur.

Planetary scientists have come to the conclusion that most often after the overflow of craters on Mars, catastrophic floods occurred. In such cases, the water broke through one of the walls of the crater and made huge gorges and channels in the surrounding mountain areas. Some of these floods, as scientists' calculations show, lasted more than a week.

In total, Fossett and his colleagues found traces of more than 200 such cataclysms. Because of them, a huge number of branched channel networks have formed in the equatorial and tropical latitudes of Mars. Experts believe that due to such floods, about 25% of the total volume of these ancient gorges arose, despite their relatively short length.

All this, as noted by planetary scientists, suggests that catastrophic floods played an important role in shaping the modern appearance of Mars. Further study of their consequences will make it possible to understand what role such cataclysms could play in the disappearance of 99% of the Martian water reserves, the researchers concluded.