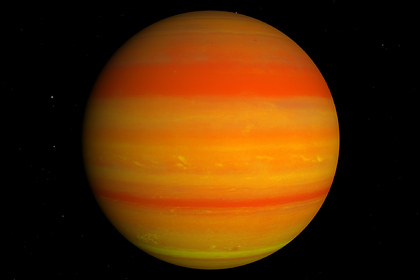 Experts have identified clouds on the exoplanet WASP-127b, known as"hot Saturn". The corresponding discovery was made by astrophysicists from an international team. The material about this is published in the Europlanet Science Congress 2021.

This planet is located 525 light-years from the Solar system and orbits a yellow dwarf in four days. This is due to the temperature that reigns on hot Saturn — up to 1100 degrees Celsius.

The study of the upper structure of the planet's atmosphere was made possible by combining data from space and ground-based telescopes. Scientists have found that the surface of the planet contains sodium and water vapor. At the same time, the water vapor is covered by opaque clouds. Experts also managed to determine that the clouds are located in the layers of the atmosphere with a pressure in the ranges from 0.3 to 0.5 millibars.

"We do not yet know the exact composition of clouds, except that they do not consist of water droplets, as on Earth," explained Romain Allard, a researcher at the Canadian University of Montreal and the Swiss University of Geneva.