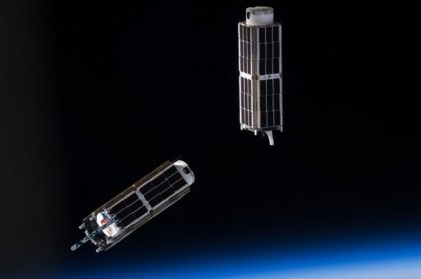 Scientists of the Tomsk State University of Control Systems and Radioelectronics (TUSUR), commissioned by RSC Energia, performed calculations and found out how to double the limited data transfer rate between nanosatellites. In the future, such studies will allow replacing expensive large-sized satellites with a swarm of less expensive miniature spacecraft during scientific research.

Earlier it was reported that Tomsk universities are planning to conduct an experiment on the ISS to launch a swarm of miniature satellites, which can be launched into orbit by an astronaut who has entered outer space, simply by letting go. Such devices in the future will work in a group, performing various tasks related to, for example, navigation and communication. In the future, satellites will even be able to repair each other in orbit. TUSUR is responsible for communication between a group of nanosatellites or a swarm.

"Due to the miniature size of nanosatellites, they have limited resources and capabilities. As a rule, small spacecraft (SSC) use non-directional antennas, which can provide a maximum data transfer rate of 200 bits per second at a distance of up to 1,000 km. The study shows how this speed can be increased. We propose to install weakly directional antennas on the satellite. At the same time, providing small spacecraft with accurate navigation and orientation systems, it is possible to point the satellite antennas at each other. Due to this, the energy of the communication channel increases and the data transfer rate increases up to two times," said Fyodor Zakharov, head of the radio wave propagation laboratory at the RTS Research Institute.

A new approach to creating a swarm of nanosatellites

The data obtained opens up a new approach to creating a swarm of nanosatellites and ensuring communication between them. In the future, they will make it possible to create a swarm of nanosatellites that can be used both for research purposes, replacing full-size satellites, and for testing technologies before using on full-size spacecraft. The swarm of MCA can be of great interest for the military-industrial complex. The fact is that to destroy a nanosatellite, you need to create a rocket or other means of destruction, which will be an order of magnitude more expensive than the small spacecraft, even taking into account its launch.

"The production and launch of a large satellite is an expensive project. In some cases, nanosatellites like CubeSat can perform the same functionality, while at the same time they are available even to students at a cost. There are technologies and tasks that can be successfully worked out with the help of a swarm of ICA, after which they can be used on full - fledged spacecraft," said Kirill Yarkov, one of the developers of communication systems.

According to scientists, to achieve maximum efficiency in creating a swarm of nanosatellites, it is necessary to divide the tasks between each of its devices, for example, to install equipment for detecting gamma-ray flashes on one, and for receiving X - rays on the other. At the same time, each device will be able to perform the function of a repeater, allowing data to be transmitted to Earth in the event that one or more of them are out of reach for the ground station.

The work is being commissioned by RSC Energia. Scientists of Tomsk universities plan to present their versions of a group of nanosatellites with already developed communication systems in 2023.