Start of the first "Arctic-M" spacecraft is planned for 2019 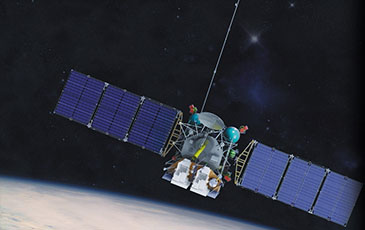 Specialists of Russian Space Systems holding (RKS, is included into ROSKOSMOS State corporation) in 2017 have finished development and have made a set of polyzonal scanners (MSU-GSM) for the first device of the new high-elliptic satellite "Arctic" system. Devices are transferred to NGO of S.A. Lavochkin for installation to the spacecraft which start is planned for 2019.

On a set of the equipment the "Arctic-M" satellite will be similar to meteorological geostationary devices of the remote sensing of Earth (RSE) of the "Electro-l series". "Arctic-M" will be placed in a high-elliptic orbit that will allow her to collect meteorological and hydrological information on a condition of polar regions of Earth which are badly looked through by the geostationary "Electro-l" complex.

Chief designer of MSU-GSM Yury GEKTIN: "The orbit of "Arctic" has the features – the device will periodically move away from the land surface and to give multi-scale images, it will have a speed, other than rotation of Earth, and also continuous change of a perspective of shooting. All this increases risks of receiving additional deformations of the image and demands use of special procedures of normalization which will be effective only in the presence of high-precision measurements of parameters of the movement of film-making system. We have considered these features and made use of all experience accumulated during operation of the first two devices of the "Electro-l" series. In devices it was succeeded to increase significantly the accuracy of measurements and a coordinate binding".

Will install two MSU-GSM devices which will reserve each other on each device of the "Arctic-M" complex, increasing reliability of system. They will also be able to work at the same time.

In progress in creation of MSU-GSM the radiation firmness of all device and its separate components has been increased.

Start of the first "Arctic-M" spacecraft is planned for 2019. After removal into an orbit of two devices of this series Hydrometeorological center of Russia will continuously obtain operational information about a condition of the atmosphere and a surface on Earth poles. It will allow to increase the accuracy of models by drawing up short-term weather forecasts and will give to scientists the large volume of new data for studying of a phenomenon of global climate change.