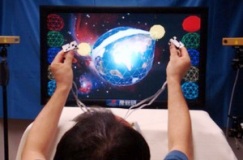 Japan's National Institute of Advanced Industrial Science and Technology (AIST) announced Aug 25, 2010, the "i3Space," a system that gives a feeling of touching a 3D image.

By attaching a device to a fingertip, it provides feelings of touching a 3D object displayed on a screen and handling the object. AIST expects that the i3Space will be used for simulating a medical operation and designing appearances as well as for game interfaces.

The i3Space recognizes the movement of fingers and controls a tactile sense and a kinesthetic sense (resistance) in real time in accordance with the movement to offer a feeling of touching a 3D image.

The real-time VR space creation system calculates the virtual force being applied to a 3D image from the movement of the user and the positions of fingers. Then, it generates reaction forces and modifies the 3D image accordingly. It conducts a series of processes to create responses to the user's movement in real time.

The multi-position tracker system locates the position of a marker attached to a fingertip by surrounding the user with several cameras. By using multiple cameras, it becomes possible to locate the position with no blind spots, the institute said.

AIST will announce the details of the i3Space at CEDEC 2010, a conference for game developers that will take place from Aug 31 to Sept 2, 2010, in Yokohama City, Japan. For the future, the institute intends to reduce the size of the system, enhance its functions and collaborate with device makers in development and field tests.