Congratulations on the Cosmonautics Day! 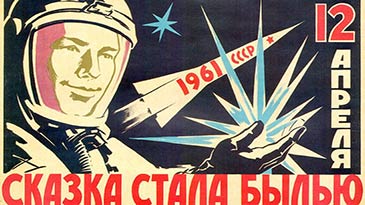 Innovative Centre Company congratulates on the Cosmonautics Day! The day celebrates the triumph of science for all those who work in the space industry. The day has also been known as the International Day of Human Space Flight.

On April 12, 1961 at 9:07 a.m. Moscow time, some tens kilometers north of Tyuratam village, Kazakhstan, ‘Vostok’ carrier rocket was launched from Baikonur Cosmodrome. It set into the near-earth orbit the Soviet spaceship ‘Vostok’ carrying a man on board. The flight lasted for 1 hour 48 minutes. During the time he was on the orbit Gagarin maintained radio contact with Earth, made observations from the viewing ports, controlled the work of the spaceship structures. Having made one turn around the Earth the descent vehicle landed in the territory of the USSR, in Saratov region. In accordance with the initial plan the cosmonaut ejected himself at the altitude of few kilometers from Earth and landed with a parachute not far from the descent vehicle. The cosmonaut’s landing took place at 10:55 a.m. Moscow time. Under the decree of the Defense Minister of the USSR for the successful accomplishment of the government task the first cosmonaut of the Earth, Lieutenant Gagarin was given the rank of major out-of-turn. On April 14, 1961 under the decree of the USSR Supreme Soviet Presidium Yuri Alekseyevich Gagarin was given the honorary title of the Hero of the Soviet Union and awarded with the Order of Lenin and the ‘Golden Star’ medal.

The first man flight into space was of a primary importance for the future aeronautics development. It gave rise to a new era in the history of space discovery and opened the door into space for many brave Universe explorers.

Since 2001, Yuri's Night is held every 12 April worldwide to commemorate milestones in space exploration. Yuri’s Night is a global celebration of humanity’s past, present, and future in space. Yuri’s Night events combine space-themed partying with education and outreach. These events can range from an all-night mix of techno and technology at a NASA Center, to a movie showing and stargazing at your local college, to a gathering of friends at a bar or barbecue.