60 years since the beginning of the Space Age 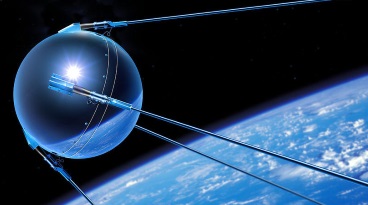 The Space Age is a time period encompassing the activities related to the Space Race, space exploration, space technology, and the cultural developments influenced by these events. The Space Age is generally considered to have begun with Sputnik (1957).

Sputnik 1 was the first artificial Earth satellite. The Soviet Union launched it into an elliptical low Earth orbit on 4 October 1957. It was a 58 cm (23 in) diameter polished metal sphere, with four external radio antennas to broadcast radio pulses. It was visible all around the Earth and its radio pulses were detectable. This surprise success precipitated the American Sputnik crisis and triggered the Space Race, a part of the larger Cold War. The launch ushered in new political, military, technological, and scientific developments.

Tracking and studying Sputnik 1 from Earth provided scientists with valuable information, even though the satellite itself wasn't equipped with sensors. The density of the upper atmosphere could be deduced from its drag on the orbit, and the propagation of its radio signals gave information about the ionosphere.

Sputnik 1 was launched during the International Geophysical Year from Site No.1/5, at the 5th Tyuratam range, in Kazakh SSR (now known as the Baikonur Cosmodrome). The satellite travelled at about 29,000 kilometres per hour (18,000 mph; 8,100 m/s), taking 96.2 minutes to complete each orbit. It transmitted on 20.005 and 40.002 MHz, which were monitored by amateur radio operators throughout the world. The signals continued for 21 days until the transmitter batteries ran out on 26 October 1957.Sputnik burned up on 4 January 1958 while reentering Earth's atmosphere, after travelling about 70 million km (43 million mi) and spending three months in orbit.