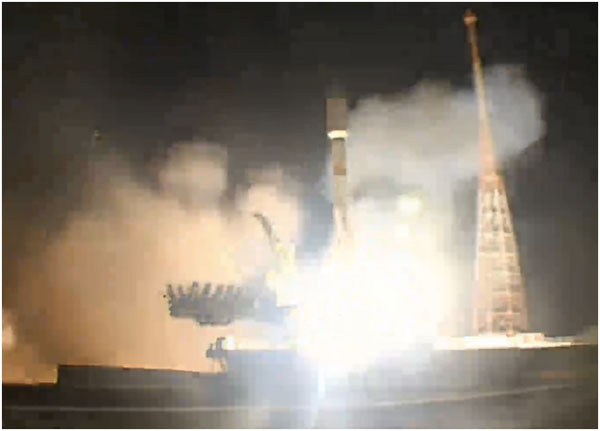 A new Russian satellite streaked into orbit aboard a Soyuz rocket Friday, carrying high-resolution cameras to survey the globe and a plasma physics experiment to seek out signs of exotic antimatter and dark matter in the cosmos.

The Resurs P2 spacecraft lifted off from the Baikonur Cosmodrome in Kazakhstan at 1855 GMT (1:55 p.m. EST), rocketing into the sky north from the storied spaceport into orbit over Earth’s poles.

The Soyuz 2-1b booster’s shed four strap-on rocket engines, a core stage engine and a bulbous nose fairing as planned. A third stage RD-0124 engine completed the Soyuz launch sequence before the rocket deployed the approximately seven-ton satellite less than 10 minutes after liftoff.

The Soyuz rocket successfully released the Resurs P2 spacecraft in the correct orbit, according to Roscosmos, Russia’s space agency.

Designed for a five-year mission, the Resurs P2 satellite will collect imagery of Earth’s surface for distribution to Russian government agencies responsible for agriculture, the environment, emergency situations, fisheries, meteorology and cartography.

Urban planners, road and highway builders, land surveyors, and the oil and gas industry could use data from the Resurs P2 satellite, according to Russian officials.

Circling nearly 300 miles above Earth, the spacecraft carries narrow and wide field of view cameras for close-up snapshots with a top resolution of about 1 meter, or 3.3 feet, and wide-angle images scanning a larger swath of Earth in one pass.

Resurs P2 has a hyperspectral camera mode to survey the ground in 96 spectral bands, allowing image analysts to tease out details about vegetation and crop yields. The hyperspectral data can also help scientists determine the effects of insects on agricultural harvests, soil salinity, and microbial activity in large bodies of water.