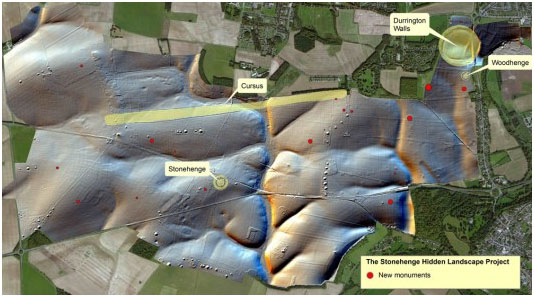 Utilizing a comprehensive array of remote sensing technology and non-invasive geophysical survey equipment, researchers working on the site of Stonehenge in Wiltshire, England have revealed hundreds of previously unknown features buried deep beneath the ground as part of the Stonehenge Hidden Landscapes Project. The finds include images of dwellings from the Bronze and Iron Ages as well as details of buried Roman settlements never before seen.

Included in the findings are many dozens of burial mounds, including a long barrow entombment structure that dates back to a time before Stonehenge was constructed. Revealed in great detail by the team's geophysical instruments, this structure was once a very large timber building, with the current theory being that it was a sort of "preparation room" used in the grisly task of ritual defleshing of the dead before burial, which was apparently popular with the tribes inhabiting the area at that time.

Later structures built around the era that Stonehenge was taking on its well-known circular form have also been revealed by this new research, with seventeen previously unidentified ritual monuments being discovered and mapped. These types of results show that new applications of geophysical technology are adding to the understanding of archaeologists about the landscape of Stonehenge by revealing much of its largely hidden 11,000 year history.

"Despite Stonehenge being the most iconic of all prehistoric monuments and occupying one of the richest archaeological landscapes in the world, much of this landscape in effect remains terra incognita," said British project leader Professor Vincent Gaffney of the University of Birmingham. "This project has revealed that the area around Stonehenge is teeming with previously unseen archaeology and that the application of new technology can transform how archaeologists and the wider public understand one of the best-studied landscapes on Earth."

Using the likes of magnetic gradiometer systems, ground and airborne laser-scanning, and ground-based radar, all mapped to GPS systems to provide total GIS (Geographic Information System) coverage, the research also revealed new and totally unpredicted information on other monuments in the area as well. The Durrington Walls "super henge," located just two miles (3.2 km) north-west of Stonehenge has been shown by the research to have once been surrounded by a circle of massive posts or standing stones.

Said to have consisted of up to 60 posts or stones some 12 ft (3 m) tall, the geophysical mapping suggests that some of these may still even be intact somewhere under the enormous earthen banks surrounding the monument. Made viewable only through the advanced technology used in the project, this discovery and mapping work has already added yet another dimension of knowledge to this vast – 0.93 mile (1.5 km) circumference – and mysterious edifice.

"New monuments have been revealed, as well as new types of monument that have previously never been seen by archaeologists," said Professor Gaffney. "All of this information has been placed within a single digital map, which will guide how Stonehenge and its landscape are studied in the future."

The results of the survey, recently unveiled at the British Science Festival, were produced as a collaboration between the University of Birmingham in conjunction with the Ludwig Boltzmann Institute for Archaeological Prospection and Virtual Archaeology, the Universities of Bradford, St. Andrews, and Nottingham, as well as the University of Ghent, Belgium.

The project also operated under the patronage of the National Trust UK and English Heritage.