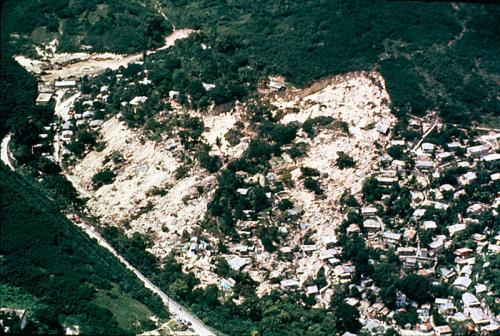 Seismologists from Columbia University in New York have developed a way to detect landslides using a combination of seismic data and data collected from satellite images. The technique can be used, the team writes in their paper published in the journal Science, to remotely detect the biggest landslides that have the most impact on people.

Landslides kill and injure people throughout the world on a regular basis—some by burying victims, others by stopping up rivers that suddenly overflow and cause flashfloods. In this new research effort, the research team has found a way to "hear" a landslide from data collected by a worldwide network of sensors. But because the data from such sensors can sometimes be attributed to other causes, each "hit" must be verified by pulling up satellite data and analyzing it manually. It's a process that can take from a few hours to a couple of days, but it's far superior to the system that exists now, and that is to rely on eyewitness accounts by people in the area after the fact.

Landslides occur when the amount of friction holding a weak cliff piece in place becomes less than the pressure exerted by gravity. The cliff piece gives way, sliding down a mountainside. When it does so, it causes different sorts of movement in the ground below, creating small low-frequency waves that can be recorded by seismic sensors many miles away. Because they are low frequency and last for relatively long periods of time, they can be distinguished from earthquakes and other events such as underground nuclear blasts.

The researchers found that not only can a landslide be detected, but information about it can be gleaned as well—where it occurred to within 100 kilometers, its magnitude, how far it slid and which direction it traveled. Such information can be very helpful—it allows for notifying authorities of landslides that have occurred in remote areas so that help can be sent, and also, in helping to ascertain if a future threat is likely, such as if a flashflood is imminent. Data obtained during the detection of landslides can also help researchers who study them learn more about how they come about and how they behave as they occur—most such studies up till now have had to rely on first hand observations made long after the slide has occurred.