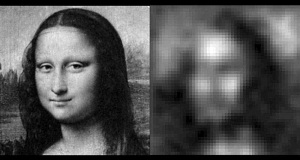 The camera was invented in the lab of Alyosha Molnar, Cornell assistant professor of electrical and computer engineering, and developed by a group led by Patrick Gill, a postdoctoral associate. Their working prototype, detailed online in the journal Optics Letters (July 6, 2011), is 100th of a millimeter thick, and one-half millimeter on each side. The camera resolves images about 20 pixels across – not portrait studio quality, but enough to shed light on previously hard-to-see things.

“It’s not going to be a camera with which people take family portraits, but there are a lot of applications out there that require just a little bit of dim vision,” Gill said.

In fact, Gill, whose other research interests involve making sense of how the brain’s neurons fire under certain stimuli, began this invention as a side project related to work on developing lens-less implantable systems for imaging brain activity.  This type of imaging system could be useful as part of an implantable probe for imaging neurons that have been modified to glow when they are active.

Gill’s camera is just a flat piece of doped silicon, which looks something like a tiny CD, with no parts that require off-chip manufacturing. As a result, it costs just a few cents to make and is incredibly small and light, as opposed to conventional small cameras on chips that cost a dollar or more and require bulky focusing optics.

The scientists call their camera a Planar Fourier Capture Array (PFCA) because it uses the principles of the Fourier transform, which is a mathematical tool that allows multiple ways of capturing the same information. Each pixel in the PFCA reports one component of the Fourier transform of the image being detected by being sensitive to a unique blend of incident angles.  While Fourier components themselves are sometimes directly useful, a bit of computation can also transform Fourier components into an image.

The scientists will continue working to improve the camera’s resolution and efficiency, but they think their concept can lead to a myriad of applications. It could be a component in any cheap electronic system – in devices that, for example, detect the angle of the sun or a micro-robot that requires a simple visual system to navigate.

Funding for this work was provided by the Defense Advanced Research Projects Agency and the National Institutes of Health.