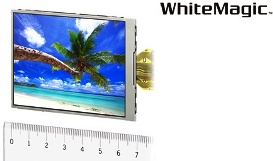 "WhiteMagic™" incorporates a 3-inch VGA low-temperature polysilicone TFT LCD module that adds a white ('W') pixel to the Red-Green-Blue ('RGB') pixels. By improving the brightness of the entire screen, Sony has been able to develop a module that offers one mode to reduce the power consumption of backlight by around 50%, as well as another mode that approximately doubles the brightness to improve outdoor visibility. Even adding the W pixel, the analysis of the input picture data and Sony's unique signal processing algorithm enable images to be displayed without any deterioration.

In recent times, devices such as digital cameras and Smartphones have been gradually calling for even larger screens and higher resolutions. There are also increasing demands to reduce the power consumption of the displays. The conventional RGB display, however, has a major difficulty in simultaneously achieving both high resolution and low power consumption.

By incorporating the newly-developed ‘RGBW method’ that adds a white (‘W’) pixel to the conventional RGB pixels, Sony has succeeded in enhancing the brightness of the entire screen of its new LCD module.

The addition of a white pixel tends to result in deterioration of the image quality. However, Sony's "WhiteMagic™" analyzes the input picture data and performs suitable signal processing (using its new algorithm), thus enabling a deterioration-free display.

As a result, Sony has succeeded in equipping its LCD modules with a new 'low power mode', which enables brightness equivalent to that of conventional RGB LCD modules, even the power consumption of the backlight is reduced by approximately 50%. There is also an ‘outdoors mode,’ which successfully improves outdoor visibility of the display by enhancing the display brightness to roughly double, even without the use of any additional power. Consequently, the ‘Low power mode’ increases the battery life of the devices, while the ‘outdoors mode’ facilitates focusing of the camera and/or checking of the images being filmed even under strong sunlight.

"WhiteMagic™" is also applicable to displays for Smartphones. Sony hopes that "WhiteMagic™" module will meet the demands of customers across a wide range of mobile devices.